Like jazz, the Jitterbug dance is an invention of southern blacks at the turn of the 19th into the 20th century. If Jazz was its father, its mother was the Texas Tommy and it was born in the brothels of Texas.

According to Marshall Stearns' wonderful book ​Jazz Dance, the basic steps of the Jitterbug (and its precursor, the Lindy) introduced that other great African-American gift to the world: the breakaway. This "distinctly unwaltzlike and non-European maneuver" can be traced all the way back to a dance called the Texas Tommy. Stearns informs us that "Tommy" meant prostitute back then, implying that it had its roots in deep South brothels. ​

It was first recorded on film in San Francisco around 1911 at Lew Purcell's So Different Cafe, "the only Negro cabaret on the Barbary Coast." Located on Pacific Street, Lew Purcell's So Different Cafe was considered the "most turbulent" of the Barbary Coast dance halls. Tales of nightly fights and even murder were reported there. The "bar next door lined the adjoining wall with sheet metal to deflect stray bullets." Although the Barbary Coast had few rules, the one thing it did have going for it, that made it stand head and shoulders above the rest of the country at that time, was that it wasn't racially segregated.

​Over a hundred years later in 2013, the SF JAZZ Center-- "the first stand-alone structure in the country built specifically for jazz"-- opened less than two miles from where Lew Purcell's So Different Cafe once stood.

When the Texas Tommy was first performed in a San Francisco theatre, "the place was jammed-- lots of cops too, expecting a riot-- but nothing happened because there wasn't anything bad about it, just a kind of acrobatics, with every step you could think of added to it."

A couple of years later the dance made its way east via a troupe of Texas Tommy dancers called "The California Poppies." Their billing featured the "fastest dancer alive," the legendary Pet Bob Thurman (of course his partner in this couple dance, Nettie Lewis Compton, was just as fast in order to keep up with him but, unfortunately, she never got the same billing). With special thanks to Daniel Meyer, Director, Special Collections Research Center at the University of Chicago Library and his assistant, Christine, I can verify that what had been speculation about what may be the only filmed image of the "fastest dancer alive" in a 1911 silent movie is indeed Pet Bob Thurman (or "Pat" depending on the handwriting). According to a rare movie still from the library's collection (below), it was either signed front and back by him or someone who knew him, his partner Nettie Lewis Compton (a singer who later married ragtime pianist and bandleader Glover Compton), and members of the LeProtti Band, (which at the time of this short movie was the house band at Lee Purcell's So Different Cafe). The LeProtti Band link is worth a read and a listen as it records interviews with Sid LeProtti as he plays musical selections from that time period. 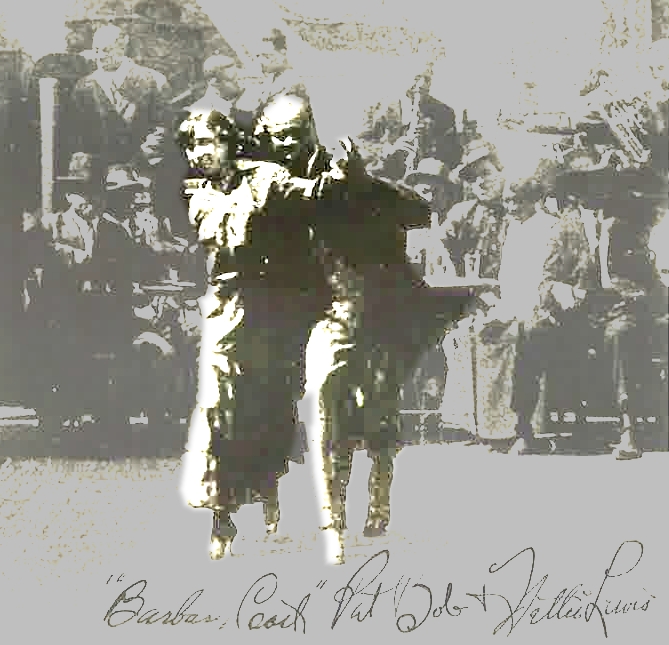 Used with permission by the Special Collections Research Center, University of Chicago Library.
The Texas Tommy-- and the breakaway-- made its official appearance on the east coast two years later when it was included in the 1913 New York premiere of Darktown Follies at the Lafayette Theatre in Harlem. The Lafayette was America's first integrated theatre and this show according to James Weldon Johnson marks the "beginning of the nightly migration (of whites) to Harlem in search of entertainment."

1928
But the rest of the world had to wait until 1928 to discover the dance and the breakaway and the opportunity it gave you to improvise on the dance floor. By that time-- possibly a quarter-of-a-century after the first Texas Tommy was danced in some forgotten Texas brothel-- it was morphing into the more urban Lindy to reflect the evolution of jazz and vernacular dance's shared "open source" to improvisation and creativity.

By 1928, the only thing the Texas Tommy and the Lindy shared beside their hyperactive DNA was the breakaway. The steps were different, changed by the music which in this case was the advent of swing. The Texas Tommy had a basic step: a kick and a hop three times on each foot. The Lindy's basic step is a syncopated two-step or box step accenting the offbeat. After these basic steps both dances segue into the breakaway which allow the dancers to get creative.

In that pivotal year, dance marathons were all the rage, especially at the beginning of the contest. Days or weeks later, interest dropped off as it had for one of the first integrated marathons at the Manhattan Casino in Harlem. Now in its 18th day, one couple who had a major following-- newspaper columnists Walter Winchell and Ed Sullivan more than once announced they were going to stop by to watch them dance after work-- made history on June 17, 1928. That's when George "Shorty" Snowden, a member of the legendary Harlem gang The Jolly Fellows, used the breakaway to throw his partner Mattie Purnell out to the side to showcase his solo over-the-top dance steps. No one had seen anything like it-- outside of Harlem and black speakeasies across the country. As Stearns writes, "even the musicians came to life." When Fox Movietone News showed up the next night to take a close-up of Shorty's feet at work and asked what he was doing and he replied, without stopping, "The Lindy," the dance and the breakaway spread across the world faster than a Harlem minute.*

And got Shorty and his partner Big Bea into Jitterbug!'s climatic dance scene at the Savoy Ballroom, to dance against the dancical's protagonists Billy Rhythm and Tharbis Jefferson.

For a look at one of the rarest and earliest movies of the Texas Tommy-- and the only one we know of Pet Bob Thurman, the "fastest dancer alive," please watch the video below. Shot in 1911 in San Francisco at Sid Purcell's So Different Cafe, the silent film begins like a salsa rueda with couples dancing in a folkloric circle and switching partners. But by midpoint, they dance as individual couples and you can see the precursor of the Lindy, the Jitterbug, and the breakaway. And some great dance steps, too. Yeah, man!​

*Before Lindbergh crossed the Atlantic in 1927, the step had been known to Snowden and others on the dance floors of Harlem as the "Hop."  Newspapers use the biggest fonts they can to spell out their front page headlines to emphasize the importance of a story-- and to catch the eye of the potential newspaper buyer. That historic crossing cried out for one of history's biggest so many papers chose "hops" as a colloquial Jazz Age substitute for "crosses." Teaming it up with his public nickname, many headlines looked like this: Lindy Hops the Atlantic! By the time Snowden is interviewed a year later, the dance step had morphed through repeated exposure into the "Lindy." 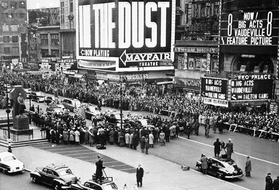 Bill "Bojangles" Robinson funeral cortege as it passes from Harlem through Times Square, March 12, 1949. Please click to enlarge.
As an aside, discovering these "ancient dancers" makes me wonder, "What ever happened to them?" I know in 1949 Bill "Bojangles" Robinson, the most famous dancer from that period, died and was buried in Brooklyn's Cemetery of the Evergreens. His funeral began in Harlem at the 369th Infantry Regiment Armory (where he served as its drum major in WW1). Over 32,000 people attended with an estimated half million more lining the streets as his cortege crossed the East River into Brooklyn.

Unfortunately, going out with style and leaving your calling card on the timeline of history wasn't the fate for most of these dancers. The public record ends for Pet Bob Thurman in 1913 when he starred in Darktown Follies. I want to believe he had a long, and fulfilling life. Unfortunately, what I know about some of these great and ancient dancers is that it didn't happen. Even Bojangles suffered. He died penniless, having given most of his fortune away to people he thought needed it more than he did. In fact, his good friend newspaper columnist and later TV host Ed Sullivan paid for his funeral.

George "Shorty" Snowden was famous "back in the day" in Harlem but few-- outside of today's mostly white Lindy and Jitterbug dancers-- know who he is. Even following his world-wide exposure on the Fox Movietone newsreel, he still didn't have a name. He was just "Number 7," the number slapped onto his back for the dance contest. The only thing that changed for Snowden following his "discovery" was the manager of the Savoy Ballroom, Charles Buchanan, finally, after Snowden had begged for one since its opening two years before, gave him a free pass to the Savoy. And not just any free pass. It was a gilt lifetime pass, the only one ever issued by the Savoy. And rightly so because Snowden helped put the Savoy on the map. He had become a major draw for black-- and white-- customers who were filling the block-long space with upwards of 5,000 people on weekend nights.

Within ten years Snowden became part of the first troupe of professional Lindy hoppers. Managed by Herbert White, founder of the legendary street gang the Jolly Fellows and the head bouncer at the Savoy, Whitey's Lindy Hoppers, thanks to their world tours and movies, became the faces of the new dance craze. But White's monopoly and exploitation of the mostly young Harlem dancers-- approximately 72 spread across 12 troupes of varying names over the years-- made Snowden as Stearns writes, "the first and last" member to "defy Whitey openly" to defect from the troupe and to tour with the Paul Whiteman Orchestra, "a decision that took considerable courage."

In the end, the fate of all professional dancers is determined by the strength and health of their bodies. In 1938 Snowden was forced into an early retirement by his doctor (and "air steps," but that's another story). After more than a decade of furious dancing, his feet had been "pounded shapeless." Perhaps something like that happened to Pet Bob Thurman who will always haunt us, dancing forever on film, smiling at us and staring optimistically into an unknown future with his unaccredited partner Nettie Lewis Compton, the second "fastest dancer alive."​